September 2019
At the start of this month it was decided to have the current website (which was set up more than 10 years ago) converted to a more ‘modern’ version, which can also be read on smartphones and tablets. We will also add an English version so that the website can be read worldwide including our contacts in India.

August 2019
Following the last visit to India (February 2019), the plan arose to have a water tank installed for drinking water, so that this is also present in times of scarcity of water. A special gift has made the financing of this water tank possible. In the meantime, the financial resources have been transferred to India and the draft has been received.

February 2019
During the annual visit to the elderly in India, a unique gathering of all the elderly took place in the Community Hall of Dekyiling. Special chefs took care of the meal and young  people took care of the serving the food and other things. There was music and singing. The contact with the elderly was warm and valuable. It was nice to see the interaction between the elderly people themselves.

December 2018
On December 5 the following message reached us:
I am sorry to inform you all that during our stipend distribution last time for the period July-Sep 2018, we found out that Granny Nima Gyalpo AYF-010 at Raipur Tibetan Colony has expired on 25.10.2018 and his last ritual will last till Mid December 2018. Hence, you are kindly requested to send his last 4th Qtr 2018 stipend so that it will contribute to his final puja. I asked the family neighbour about the need of extra fund but came to know that he has some savings which will cover the religious pujas. Mr. Nima had some diarrrhoea problem and later due to much dehydrade he could not recover it. Let us all pray to our granny Nima Gyalpo, Om Mani Padme Hum!

December 2018
In the past six months, we have been greatly hindered by the automation of payment transactions between the Netherlands and India. After a long investigation, also done by the bank’s side, it became clear that the automated check of the transfers is extremely critical of the description on the payments. We now know which information must be stated and in which format. 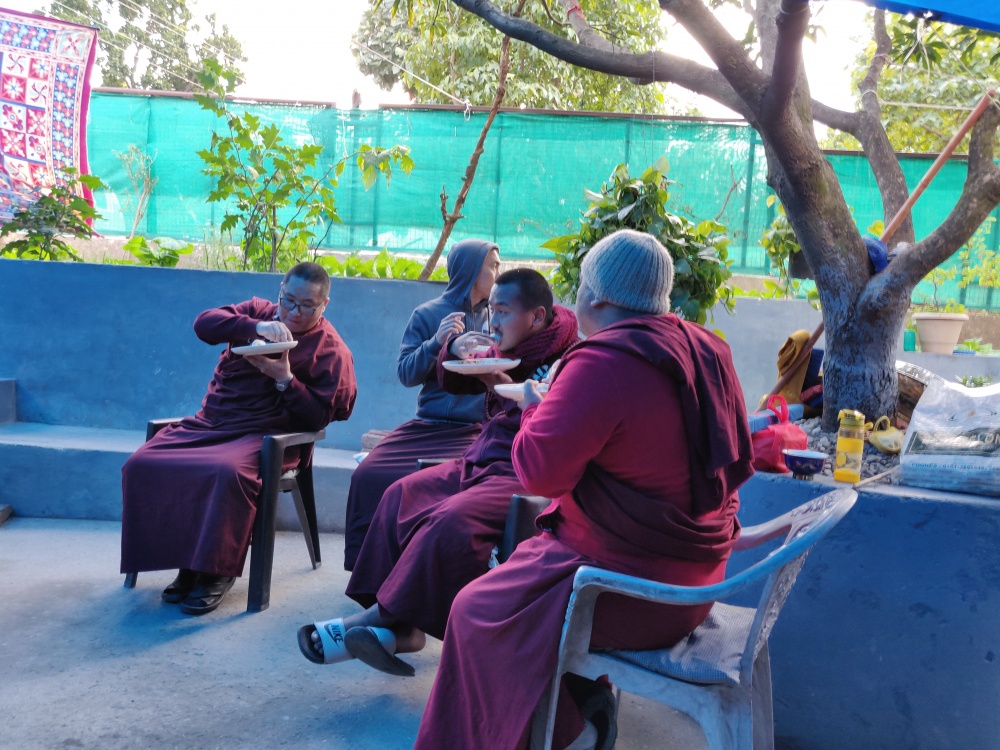 June 2018
On 7 June we received the following message from our contact person, Dorjee Tenzin:
I am here to inform you that AYF-025 Jampa Wangchuk at Drikung Nunnery Centre looked after by the Nuns had finally expired on Friday 22, June 2018 without any major illness or pain. After hearing the news, I along with a Secretary from our main office visited the Retreat Centre and met with the Ani La who is caring after him. They were very grateful for the fund and says it helped his funeral with the main support from the Nunnery Centre.

April 2018
The foundation has decided to make a number of permanent additions to the support that we provide to the elderly.
– € 180 is made available for the support of the rituals during a funeral / cremation. It is stated that this is the average amount. We ensure that there is always enough money available on site to provide this support.
– € 500 per year is available for supporting prayer meetings in the community centre. These funds are meant for means to support these meetings.
– we make an amount available for each elderly person to pay for a simple health insurance.

April 2018
At the beginning of April the first older person we supported, Ama Kyipa, died. She turned 93 years old. The Ama Youdon Foundation supports her cremation. Her older sister (bedridden, now 96) continues to live alone in the home. We received the following message from India:

I am here to inform you all that Momo Kyipa sponsorship started from July 2009 has passed away on 3/4/2018 due to the year old fractured hip. Her sister Momo Choenyi Paldon is supported as the couple for the past many years, so I think you will consider continuing in the place.

February 2018
Our chairman William Yang visited all the elderly in India again in January. All elderly people have received a wonderful warm hat this time.
Furthermore, new photos were made and, thanks to the presence of a daughter of Tsultem Rinchen Dorjee, Kunsel Rinchen Dorjee, who acted as an interpreter. Various conversations were also held. This has led to a number of biographies on the website being updated.
This month all donors have again received a thank you card for their donations. We have coordinated the shipment with Losar, the celebration of the Tibetan New Year (16-18 February).

January 2018
is Mr. Sonam Tsenphel, born in 1950, is added to the list of elderly people who are supported by the Ama Youdon Stichting. This brings the total number to 16.

December 2017
From this month onwards our account at ABN AMRO will be active in order to run our bank transfers to India smoothly again.

October 2017
We were recently informed of the death of Mrs. Llamo Tar. She died on September 30. The neighbours arranged the funeral and collected donations to pay for the necessary rituals.

September 2017
We have decided to transfer a one-off amount each year as support for the weekly meditation meetings attended by the elderly. It concerns costs for incense, candles and other offerings expenditures , also it covers a contribution for a lama.

July 2017
Since this month we are having problems transferring the stipends to India by bank. This is probably due to the fact that the transmission of the funds goes through a bank in Brussels. For this bank, the requirements on the receiving side in India have been tightened, so that the transfer comes back. We then decided to let payments abroad go directly through a bank that is represented in India. Until that time, the stipends are transferred via a Western Union location, a fairly comprehensive method.

April 2017
The 2016 annual reports have been added to the website.
We have started to contribute to the rental costs for a number of elderly people. These costs are so high for these people that they spend a disproportionate part of their financial resources on them. We contribute 600 rupees every month for 4 elderly people (= approximately € 8).

January 2017
The annual reports of 2015 have been added to this website. You can download and read it. The documents are in PDF format, for which you need the Acrobat Reader program on your computer.

Since the end of 2014 we have supported the work of the nurse Namgyal Dolma. A contract has been concluded with her, which was in accurately way put down on paper by the contacts in Dekyiling. If you would like to see it, you can click on this link.

The ‘Photos of the elderly’ page has been completely updated on the website. More extensive biographies have been added to the photos so you can have a better idea of ​​the lives of the elderly that we support financially. With this link you go directly to this page.

December 2016
We have registered our foundation at the YouBeDo website. This is a website where you can order your books, just like at BOL.com, but where 10% of the purchase amount can be allocated to a charity. One of those charities is now also the Ama Youdon Foundation. This is located under the charities that start with the letter ‘A’. May we ask you to place orders for Dutch books from now on through YouBeDo? The book price is the same, but you can support our work with this.

September 2016
On September 23, Mr. Sonam, one of the elderly people we support, died in Dekyiling at the age of 85. We have been able to support him financially for the past 2.5 years thanks to the donations from our sponsors.

September 2015
After skipping last year, our chairman William Yang will again visit the elderly people we support in the Dekyiling region in northern India in January 2016. This time he also hopes to be able to see more of the work of our care taker who regularly visits and supports the elderly.

August 2015
The home of our founder, Liesbeth Steneker, was sold last month. This will make the legacy available to the foundation in the near and more distant future. This means that our survival and support for the elderly will be guaranteed for a longer period of time. However, we want to keep the legacy ‘under control’ for times when the income from donations or from sponsoring campaigns gives less scope.

July 2015
In this month, several people again participated as sponsors for the international four-day walk event in Nijmegen. A number of volunteers along the route also manned a post for recovering. From this post, which was recognizable by the Tibetan flag, our flyers were also distributed to passing and interested walkers. An amount of almost € 900 was raised for sponsor money. We thank both the Walk for Tibet foundation, the walkers and volunteers.
The photos can be viewed on the Walk for Tibet website (http://www.walkfortibet.nl/336954335).

May 2015
In the past few months, the first donors have joined us who will support us on the basis of an annual notarial gift. We are very grateful for this in advance. Regular support is the most pleasant for us and for the elderly, as it is in this way that we can coordinate donations and benefits best with each other. Without regular donations, we must always be a bit cautious about bringing in new elderly people. So: please support us with your regular gift!

March 2015
One of our supporting volunteers has decided to ask family and friends for a contribution to the Ama Youdon Foundation for his 60th birthday. This has been used generously, meaning that a total amount of € 1000 was credited to our bank account in the past month. Thank you very much. Maybe an idea to use your birthday to support the Ama Youdon Foundation?

July 2013
On July 6, 2013, it was a year ago that the founder of the Ama Youdon Foundation died. To memorize this a Pooja, a special ritual, was held in Dekyiling Mani Lhakhang. This service has been attended by the Head Lama and the monks and all the elderly who are supported by the foundation.