The AMA YOUDON FOUNDATION was founded in June 2008 by Liesbeth Steneker through a notorial deed. Her long time friends William Yang and Diederick Sprangers supported her ideas and encouraged her to set up a foundation.  It was laid down in a testament that after her death part of her legacy would become available to the work of the Ama Youdon Foundation.
Who was Liesbeth Steneker? Click here to read her biography.

The origin of the name of the foundation:
Ama Youdon was the first woman to be supported by one of the initiators of the foundation in Dekyiling.  Ama Youdon was born in South Tibet in 1926. In 1959 she fled to Bhutan. When she also had to flee from that country she went to India and since then lived in Dekyiling near Dehra Dun. Ama Youdon has been supported since 2003 by Diederick Sprangers who, when visiting the Tsultem store in Nijmegen, saw that a sponsor was wanted for this woman who had a difficult old age without the care of her own children. Until her death on November 8, 2009, he not helped her financially and supported her also in other ways.

Diederick visited her every year in Dekyiling and a warm bond developed between them. His experience provided the necessary insight into the situation of the elderly, including illness and death, within the Tibetan refugee community. When Liesbeth Steneker, who was friends with Diederick, became aware of his experiences, she decided to leave her legacy to the benifit of the Tibetan elderly in India and especially to those whose children are not capable to provide for them. She thought it would a suitable idea to name the foundation after the woman  who initiated this. 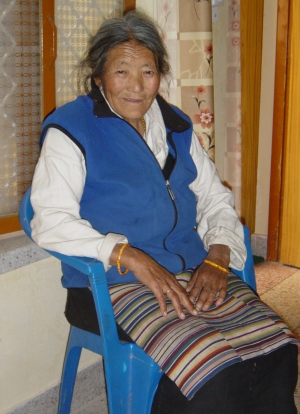 In the name of the foundation the memory is kept alive of a simple, loving Tibetan woman. She represents the fate and suffering of her people today.